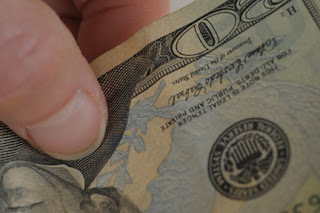 Paper money that was being analyzed for its print qualities is a recent observation I had at a local luncheonette. A twenty-dollar bill hanging on the bulletin board over the cash register was brought up in conversation. The bill was unpinned by the owner of the luncheonette and brought over to the row of customers at the counter. The questions began with what feature was missing from the money to make it less than authentic. This particular twenty-dollar bill was a counterfeit and hung up as an example. The owner asked a customer to volunteer one of his twenty-dollar bills to use as a comparison. A customer's bill emerged and the intriguing part of my observation and participation started.

The owner started to demonstrate with his thumbnail the ridges through out Andrew Jackson's coat. The counterfeit was lacking this fine detail. Soon the row of five customers was passing each bill and closing inspecting it with the sense of touch. I noticed a couple of the customers repeating the delicate act over till they had felt the embossment. This observation took the aspect of money out of its standard economic form and was inspected for its print qualities. Even though it still referenced faux and authentic versions of currency, it was an experience to critique two forms of a print in a luncheonette.